skip to main | skip to sidebar

*This refers to nutritional value, ethical procurement and portion sizes.
Posted by Natasha at 10:36 PM No comments:

So since my last post I have clearly remained a very lazy blogger. I'd like to reassure you all (and myself) that I have not completely abandoned this blog! My latest excuses include a lingering lurgy and an enormous essay. I plan to be rid of both of these by the weekend... and then can turn to all those things I've been ignoring:
In the meantime, here is a giant octopus fighting a shark:

The peaks and troughs of productivity

I'm sitting on the couch, doing some internet business. I've had a delicious and none-too-healthy haloumi pasta and two glasses of wine, and I'm feeling a whole lotta Monday lethargy. I planned to make a start on an essay tonight. The same essay I planned to make a start on yesterday. Yesterday, instead of making a start on my essay, I went for a long walk up Sydney road with Leith, just to get some fresh air, and also a book, a record and a new pair of bathers. And some gourmet chocolates. And now all I want to do is go to bed, read my book for 20 minutes and then fall asleep with my glasses smooshed on my face until Leith gets home from his rehearsal, laughs at me, and turns off the light.


I'm sort of mildly disturbed at how much I want to sleep, watch tv, and generally laze about at the moment. I sometimes go through intense bouts of productivity: I can work long hours, start baking projects at 10pm, get up early and go for long runs, and use every minute to the full. But the last week or so has been notably relaxed.


I'm a bit annoyed at myself - all the things I haven't done in the last few days (run, study, bake, call friends I should have called etc etc) that I should have done. And there are things I've voluntarily let slide. Things that aren't essential, but that still add value to my days. Things like writing on this blog.


But at the same time, I can't get too worked up over it, because life is good, and I'm relaxed and happy. Maybe I shouldn't be. I can't help but think that I need to knuckle down a bit more. After all, most of the things I'm not doing are things that no-one apart from me can hold me to - they're things I want to do. So I'm being a bit perverse. But actually, it's not very often I get a chance to take it a bit slower, and so I'm going to let it go on for one more day...
Posted by Natasha at 9:26 PM 1 comment:

Is there a particular phrase  drives you barmy with rage? I have one. I heard it just now. I was in the chemist and a gruff older dude stomped in in his work boots and asked for a script he'd dropped in earlier. The neat, pony-tailed assistant said "I'll just get it for you" and he responded "Good girl".
Good girl.
Honestly, have you ever thought of saying this to a grown woman? Here's a tip. DON'T. I felt so mad for her. She politely continued on with her business and didn't seem to be mad, but then I usually react in a similar way because of MANNERS and POWER DYNAMICS relating to AGE. Because I don't hear it from anyone younger than me, or even those who are my contemporaries. Nope.
Being told "Good girl" is an unfortunate reality from time to time, and each and every time it's said to me it fills me with rage, and chips away at any respect I have for the person saying it. It's the verbal equivalent of a pat on the head, and every bit as patronising. It is said in a number of contexts, and as with the chemist today, I'm sorry to say that most of them are in the workplace, where you would hope that things like age and gender would just be left out of it.
The first situation in which it's often said relates to me having just performed some entirely basic and ordinary task that would be seen as merely minimum functioning in any adult with a normal intellect. This might be remembering to bring a document to a meeting, or something equally innocuous. Telling me I'm a good girl in this kind of circumstance is so utterly demeaning, because it implies that something that really ought to be assumed in even a mediocre employee making a nod towards professionalism is being rewarded to me.  Would you say "good boy" to a grown man in the same situation? So for fuck's sake don't say it to me. (Seriously, if you answered 'yes' to this you need to go take a good hard look in the mirror). Just say thanks with all the decorum and brevity that the situation calls for, in a manner that acknowledges that I am in fact a professional and capable of really basic shit even though I am, like, female. Like the chick in the chemist today.
The second situation is where I've actually performed above and beyond in some way or another. "Oh good girl" I'll be told. No. Not fucking good girl. Guess what - the reason Ive performed so well and been able to impress you is probably because I'm a lot smarter than you. I'm sorry to come across as arrogant but seriously, my IQ is probably higher than yours despite me being younger, and being told "good girl" by you just makes me seethe. You know what else? I work hard. I've got many years of study under my belt, and even more of workforce experience. I'm an adult. I'm 30 goddam years old. So between my age, my intellect and my hard work, I would like to be treated as a professional in a professional environment. IS THAT SO MUCH TO ASK?!
These are some of the things I will think if you call me a "good girl". Just so you know.
This includes you Tony *fuckface* Abbott.
RANT ENDED


NB If you are a complete moron, here is a basic test you can use to work out whether it's appropriate to say "good girl" to someone.
Q Would you say "good boy" it to a man your own age in this situation?
A Then don't say "good girl" to me.
Posted by Natasha at 4:58 PM 2 comments:

I have four days off this week. It's Time in Lieu resulting from the heinous overtime I worked during January, February and March this year. It took four months and some agitating to get these four days off. And I am spending all of them at my computer because I have a 4,000 word essay due for uni on Thursday. Balls.
I had a grand fantasy of getting everything done by Wednesday and taking a Real Day Off - maybe going to some galleries, sleeping in, seeing a movie, that kind of thing. However it is 6:25pm on Monday, I have been at my computer since 10am, and I am WELL BEHIND SCHEDULE. It is seeming highly unlikely that I will get said day off.
At this time it is important that I perform two great acts: one of remembering and one of forgetting.
Note on Act 1: I am a massive eejit.
Now, back to work...
Posted by Natasha at 6:34 PM No comments:

And just like that, we have a new female PM.


I don't think anyone really knows what to expect from her. I don't. But I'm hoping big things, for Australians, and for women.

Posted by Natasha at 1:51 PM No comments: 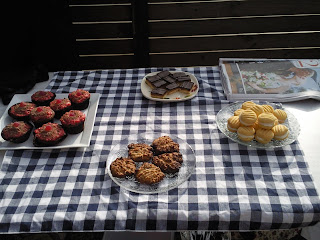 Have you ever held a bake sale? I recommend it. Leanne and I had one last Saturday, and we had super huge amounts of fun. Sure, there was lots of standing, and some people (ie everyone) ate so much sugar we were bouncing off the walls, but what can you do?

How hot is Leanne when she punishes that biscuit dough? I know. 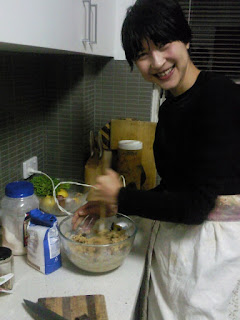 We were set up at Smiley McSlidey Rehearsal Studio, who were celebrating their opening with a large garage sale, gig and bbq.  Lez and I got together and had one of the most fun Friday night's ever. We drank wine, ordered pizza, watched Masterchef and WE BAKED LIKE MACHINES. Honestly, we were so on top of our game, we had whipped up three different kinds of goodies by 8pm, washing up as we went, exchanging extremely important gossip and only slightly burning one batch of biscuits due to wine/good times. 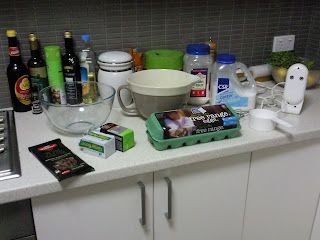 Then, having produced our delicious wares:
We set ourselves up with coffees and the paper, and sat around all day while our friends traipsed through, exchanging hugs and money for sweet treats. Then we spent all our profits on clothes at the sale. We probably could have made more profits, but we were weakened by the cuteness of the many kids there and sold a lot of stuff for cheap (like 20c cupcakes! Bargain!). Also Leanne busted a little girl shoplifting biscuits and made her go and get $1 from her parents. I was proud of Leanne's moral fortitude, and frankly thought the little girl showed little to no remorse. So after all it was an important day full of life lessons, even more than just don't sit the chocolate slice in the sun and if you bake it, they will come, and not just a frivolous excuse for two grown women to make a big mess and wear silly aprons. 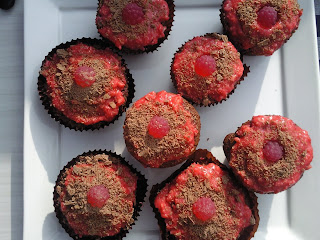 Also, at this point I'd like to tell you about my yoyos. I don't want to brag... okay okay, I really want to brag, but my yoyos are just so good. All credit to my Mum, since it's her recipe (would you like it? Okay, here it is). And she came and bought one to test mine, and I think I passed.  I do want to say that I've made yoyos numerous times and these were probably the best batch I've produced so far. 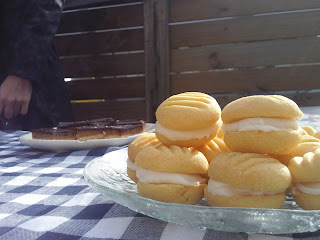 They're all gone now, in case you were wondering. Because we sold out of everything by about 3pm. Uh huh. It was a really lovely day, which is likely to be repeated in a few months, and I'd urge you to get down there, have a snag, buy a skirt, hear some bands, and eat a yoyo (if there's any left).
Posted by Natasha at 8:01 PM 2 comments: